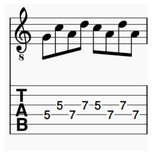 Sometimes it’s fine to play a melody and be done with it. But sometimes you don’t want to let that melody go. What can you do then? Of course, you could just repeat it but that gets stale quickly. Are there other ways to keep your melody but make it sound new, different and interesting? Yes, there are several ways. Here is one such way. Just follow the steps to produce the intended effect.
The Method
Step 1:
Play a simple melody on the middle two strings. This can be anything, but keep it simple for now. One simple possibility in the A minor pentatonic is shown below.

What happens here?
The position change to the higher strings raises each note by an octave. This alters the sound of the note but the function of the note stays the same. The effect can be described as a second voice singing the same notes but higher. This technique allows you to get more versatility into your guitar playing.
​
Advanced applications:
Switch the order around. Play on the highest two strings first, then change the position to the middle two strings three frets down. By playing the higher notes first and answering with lower notes you can give your melodic lines a different feeling.

This technique works even better, when there is a chord change happening while you change positions. This may result in a bit of dissonance over the new chord. If that happens try changing some notes when changing positions. Especially the last notes.

When you start to subtly change the melodies when changing you arrive at the point where it gets really interesting. You can try to first play a melody that ends on a high note and then answer with a similar melody which ends in a low note. This has a surprising effect, because it mimics the way we use the pitch of our voice to punctuate our questions. The technique is called call and response. You can get a lot of mileage out of a simple melody if you apply these ideas to it.

You could also try to play the melodies in both positions together. Use the index finger for the notes on string three (G) and four (D) and use your pinky finger to play the notes on strings one (E) and two (B). Here it is advisable to use the lower side of your index finger to mute the next higher string. If you do that correctly you can play the two notes easily by hitting the three adjacent strings. The middle string should be muted by your first finger and should not produce any dissonant noises.

This articles was written by Rene Kerkdyk, the guitar teacher in Hildesheim. If you want to learn more about this concept, take lessons in Hildesheim or learn about other possibilities to enhance your melodies be sure to contact him.